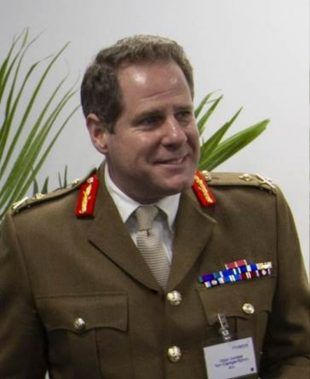 Major General T R Copinger-Symes CBE - Director Military Digitisation, UK Strategic Command Tom spent his early career with The Royal Green Jackets (now The Rifles) on operations in Northern Ireland, Bosnia, Kosovo, Iraq and Afghanistan; and in operational and strategy posts at the Permanent Joint Headquarters and the Ministry of Defence. In 2014 he formed and commanded 1st Intelligence Surveillance & Reconnaissance Brigade, created to integrate the Army’s intelligence collection and exploitation capabilities. In 2017 he led the ‘Information Manoeuvre’ Project, commissioned by the Army’s Board to explore the benefits of integrating the Army’s information-centric and digital capabilities and to exploit digital technology with new ways of warfare. In his next post, as a Major General, he commanded those capabilities, pioneering the Army’s response to a new era of great power competition, which culminated in his formation’s re-designation as 6th (UK) Division. In Aug 19 he took up his current post, newly created to accelerate Defence’s Digital Transformation and increase its adoption and exploitation of digital technology. He reports to the Defence CIO and is the only military officer in the Defence Digital senior leadership team, so he spends most of his time learning new skills and language.