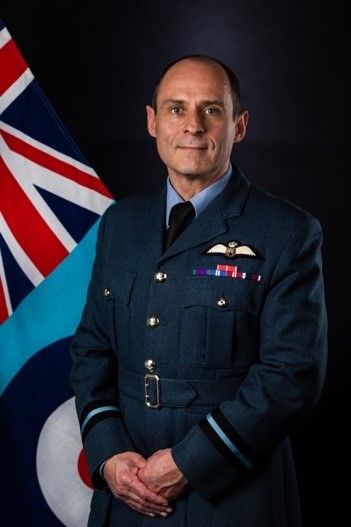 Air Commodore Mark Flewin CBE is a Fast Jet pilot and Qualified Weapons Instructor, who has completed several frontline tours and operational deployments on the Jaguar and Typhoon. He joined the nascent Typhoon Force in 2005, taking on instructional and standardisation roles to support capability growth, alongside operational deployments to the Combined Air and Space Operations Centre in Qatar and to command 903 Expeditionary Air Wing in support of Op SHADER. In addition to Front-Line command appointments, joint roles have included: Chief of Staff within the Air Staff at the Ministry of Defence and Chief of Staff, Joint Effects at the UK Permanent Joint Headquarters, where he was appointed CBE in 2018 for his operational contribution. He assumed command of RAF Coningsby in 2018, supporting a multitude of operational commitments in the UK and overseas, as well as the key commemorative role of the Battle of Britain Memorial Flight. A short tour as Typhoon Force Commander followed with oversight of RAF Leeming, the Hawk T1 fleet and the Royal Air Force Aerobatic Team, in addition to the Typhoon Force at RAF Coningsby and Lossiemouth. Upon completion of the Higher Command and Staff Course, Air Commodore Flewin was appointed to the newly formed UK Space Command, with an exciting portfolio including oversight of UK space operations, planning and training.