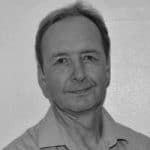 Dr Jonathan Leach is a GP in Bromsgrove, Worcestershire. Jonathan originally pursued a military career for 25 years and worked around the world in the Army being promoted to the rank of Colonel in 2002. Posts comprised clinical, managerial and academic roles, including Professor of General Practice and Director of GP Education, as well as providing medical support for UK operations overseas in both clinical and command capacities.  Since returning to the NHS in 2008, he has had senior executive positions, including Medical Director and Director of Primary Care for Worcestershire and Associate Medical Director for NHS England. In addition to clinical work in Bromsgrove, Jonathan is the NHS England Associate Medical Director for Armed Forces and and Veterans Health and thus advises NHS in England on the NHS care of service personnel, their families and veterans. In this role he has been instrumental in the design and delivery of the new models of care for veterans and especially in the field of mental health.  He is also involved in developing a network of ‘veteran friendly’ NHS GP practices as part of a partnership with the Royal College of General Practitioners; this currently has over 1000 surgeries signed up to the initiative with the intention that it will be rolled out nationally.  In addition to the above roles, Jonathan is Joint Honorary Secretary for the Royal College of General Practitioners.

In Nov 20. Jonathan was asked to be the Medical Director for COVID-19 Vaccination for NHS England.  Work has since encompassed planning and advising on clinical aspects of delivery as well as working clinically to vaccinate patients in care homes and GP surgeries.  Jonathan  was awarded the OBE for services to General Practice in the 2020 New Year’s Honours List.